FIFA MANAGER 13 that will be released this year is the 12th edition of the franchise, and focuses on the new Team Dynamics feature which makes your team come alive.

As a manager in FM13 you have complete control over the management of a modern football club. In the game you are responsible for the line-up, the tactics and training of your team, for signing the right players and the extension of your club facilities and the stadium. The special highlights in FM13 are the FIFA license, the FIFA 3D engine, more than 40,000 licensed players, many of whom come with original player pictures, the player manager and national team manager mode, the Create-a-Club mode and the Match Prognosis Tool as well as a unique, comprehensive editor.

Fifa Manager 2013 is no longer available to purchase online. Why not try out one of our other football manager games?

Team Dynamics - Fifa Manager 2013 comes alive with a team analysis feature called "Team Matrix", as well as a hierarchy pyramid, which allows you to visualize which players are facing challenges in the team pecking order. In the Team Dynamics section you get an overview of team hierarchy, rivalry, personality clashes, personal goals, family relationships and much more.

Your assistant manager helps you to analyse the team, and requesting a psychological profile of a player before signing him might help avoid future problems.

The new individual player objectives have a special role, and your team will be successful only with enough team leaders and everyone pulling in the same direction. From balancing player rivalries to spending enough time understanding and setting player expectations, Fifa Manager 2013 will push you to perfect the art of team management.

Squad Planner: This tool allows you to plan your squad for the next season. You can select current squad players, players in negotiations with your club and players who are just on your scouts' short list. It is then possible to try out various combinations to explore the impact they could have on your team and to directly start negotiations in case you want to really sign a player.

Upcoming Events: This screen lists all upcoming events and improvements; from dates of important matches to the completion date of the new stadium.

Player Development Tool - This tool allows predicting the career path of players depending on parameters like injuries, matches played, other positions, talent etc. It is an extremely helpful tool to make sure a player can really help the team long-term.

Half-Time - The new half-time feature gives you more control with detailed player speeches and new team speeches, options to boost the energy of a player by a massage or to offer players with minor knocks medical treatment, direct feedback on your decisions and the new Assistant option to delegate your work.

Player Objectives - Every player of the team has his personal objectives. Some want to become a first team regular, others want to play for their country, some simply want to improve their skills, whilst others want to be captain or take the penalties etc. The status of these objectives has a massive influence on the player's morale and as manager you must try your utmost to keep your players happy. You can now talk to a player to change his expectations or to give him new objectives. Also there are specific new talks for many situations, e.g. when you want the player to accept a loan deal or to move him to the reserves.

3D Match Improvements - The tactical settings now have more precise definition. There are no longer 3, 4, 5 or 6 settings, but you can essentially select probabilities for short versus long passing, the playing direction, the position of the defensive line, or the height of crosses. In particular crosses into the penalty area were improved and the headers become more realistic.

Numerous new fan banners in the stadiums create a more authentic atmosphere, and the fans now show their colours with shirts, scarves and jackets.

New Drag and Drop Quick Access Menu Bar - The new quick access menu bar allows you to select as many menu items as you like. You can then directly reach the relevant menu item with one mouse click. Every item also shows information whether you have already opened the respective screen on a particular day, and it also flags potential problems.

Numerous new fan banners in the stadiums create a more authentic atmosphere, and the fans now show their colours with shirts, scarves and jackets.

Live Ticker - In the Live Ticker the focus this year is on additional options for the manager to have direct influence on the game. The main feature is the new decision system to shout orders onto the pitch in more than 20 specific situations. Also Fifa Manager 2013 includes the option to control the penalty taker and many additional comments on your tactical decisions. Last but not least the step-by-step text mode - which was very popular with the community in former versions of FIFA MANAGER - is reintroduced.

Your Feature! - Again the new edition of FIFA MANAGER includes many features suggested and selected by the community via a series of polls on our website. These features include "Shooting Stars" (with a particularly quick player development for a limited amount of time), the "Buy-back Clause", "Local Scouting" and "Dynamic League Development" (e.g. the television money changes in relation to the average league attendance and the clubs' international success). 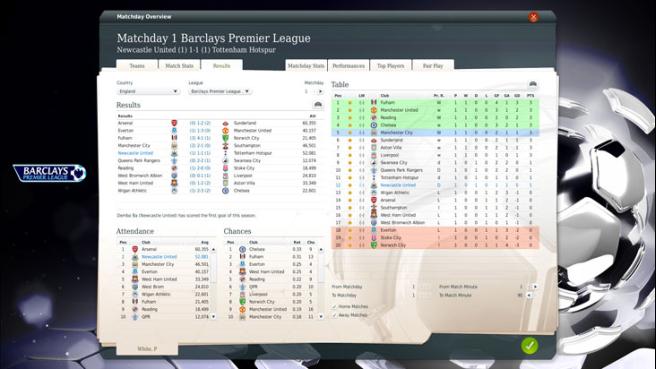 Fifa Manager 2013 is no longer available to purchase online. Why not try out one of our other football manager games?

Fifa Manager 2013 is developed by EA.